Adding Class to a Motel Rendezvous

Sometimes you run into problems when you’re dating a woman and you want to have some amorous action. Maybe you live in a major city where you’ve been lucky enough to find another man of your caliber willing to share a clean adult apartment that is also very cramped; Canada can be expensive. Maybe your girl lives with her family, adding an awkward style to the dating dynamic. Whatever the situation, sometimes you just want your own space, but you don’t want to pay for a hotel. This is where a motel comes in. You can afford it, or you can stay for longer than in a fancy, expensive hotel.

Upscale hotels are great for splurges during special occasions like your one year anniversary, a night of indulgence for your lady, or some other reason. The idea is that it’s a splurge and a special treat, not a practical solution if you just want some privacy and alone time because it’s hard to find some otherwise.

Getting a motel room doesn’t have to be sleazy. Here are a few ideas of how to make a motel rendezvous as classy as an expensive hotel. 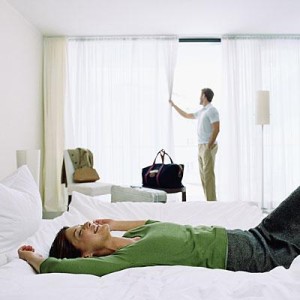 “Take the essential things with you”

Before you bring her to the motel room, go check it out for yourself. While no one expects a motel room to have mints on the pillows, it should be clean. Check for reviews and reports online for any problems that other customers have had in the past and use that information to try and get the best motel you can. There are common problems with motels that you don’t want to contend with, like bed bugs or dirty sheets. Don’t ruin your entire evening by realizing that you’re sleeping in a bed full of bugs or that there’s mold growing in the shower – that’s going to kill the mood for both you and your lady.

Although the motel room itself might be inexpensive, you don’t have to skimp on dinner. Since you haven’t blown all your money on a fancy hotel room, set up a pleasant place to eat dinner in your room and order something special like gourmet foreign food or a dish she particularly likes. If you’re a good cook, you can even prepare something yourself; the point is that it’s special.

Bringing All the Right Accoutrements

“You can play your fantasies in a hotel room”

Part of the reason you’re settling for a hotel room is because you’re looking for an opportunity for the two of you to have some quality time together, or in other words, have sex and not have to keep your voice down. Go ahead and bring some light bondage gear if you’re both into that. While you don’t want your adjacent motel neighbors calling the police because it sounds like a woman is being murdered, you definitely don’t have to be as quiet as you would in your own cramped home. Go ahead and make that mattress shriek have her writhe under you and moaning while handcuffed to the headboard and have a great time.