In any snowy place, it’s going to be hard to check out the beautiful women around you. There are beanies, snow boots, and fluffy pants galore. What are you supposed to do when you meet a woman and can’t actually tell what she looks like under that snow jacket? While you won’t be able to get an immediate read on her, you can use your dates and time together to get some clues and figure out what she actually looks like under there.

Take a Look at Her Face 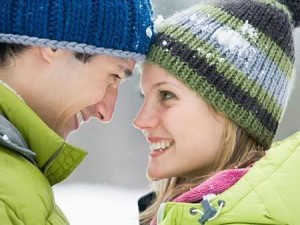 “Pay attention to her face and jaw line”

While makeup does wonders for many women, it can’t actually hide fat. Notice first the shape of her face. Not everyone has the same kind, so it’s important to take in the features that actually make it up. Wide foreheads, round cheeks, and square jaws don’t mean that she’s overweight. Double chins and fat under the cheekbones do indicate some extra pounds. This might not be the worst thing depending on what you’re looking for.

There are two types of people in this world: those that can eat all they want and don’t gain a pound and those that have to watch their weight. When you take her out, it’s not a crime if she doesn’t get a salad and diet water, but when she gets more food than you do or gobbles it down like she hasn’t eaten in weeks, there might be some of it clinging to her curvature.

What Kind of Jacket Is She Wearing?

Many guys may not know this, but women’s fashion is extremely biased. While women who are of average size don’t have to worry about clothing options, plus sized girls rarely have anything cute or sexy clothing to wear unless it’s specifically designed that way. If she has a variety of cute little snow jackets that match her shoes, then she probably doesn’t have any issue finding them in her size. However, a dull gray or black snow jacket that’s in constant use and doesn’t exactly seem to fit any sort of shape on her probably means that she’s limited in her options and has a little shape to her.

Give Her a Hug 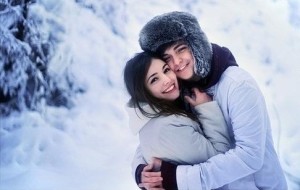 “Hug her to feel what’s inside her jacket”

Most of the time a hug is one of the first bases reached when seeing a person during dating periods. Of course, long stead-fast hugs aren’t appropriate the first time around, but after a few embraces, it’s alright to really squeeze her; even a thick jacket can’t keep from being compressed. You’ll really get to feel her shape and size. It’s almost like a blind person feeling their way around to learn what someone looks like. One piece of advice though: if you start feeling around too much you might seem a bit pervy.

If You Can’t Really Tell…

Just take her to a place that has a heater. Applying heat to the situation will get her to take off that heavy jacket and you’ll get to take a peek at the body underneath.